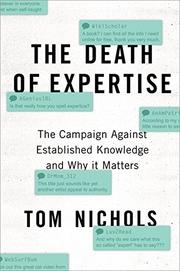 THE DEATH OF EXPERTISE

The Campaign Against Established Knowledge and Why It Matters

Some fresh twists on a familiar theme: the dumbing down of America amid the defiant distrust of expertise.

As a veteran governmental adviser and think-tank participant, Nichols (National Security Affairs/U.S. Naval War Coll.; No Use: Nuclear Weapons and U.S. National Security, 2013, etc.) has experienced firsthand the decline of respect accorded specialists in many disciplines, as the internet has leveled the playing field to the point where all opinions are more or less considered equal, and a Google search substitutes for decades of research. “These are dangerous times,” he writes. “Never have so many people had access to so much knowledge, and yet been so resistant to learning anything,” However, the author sounds less like an alarmist than like a genial guide through the wilderness of ignorance. There are no startling revelations. Media in general and social media in particular tend to function as echo chambers, reinforcing biases. Some of those whose conclusions are the shakiest tend to shout the loudest, basing their arguments on spurious evidence. Credentials are suspect in an age when university degrees are everywhere, grade inflation runs rampant, and colleges woo prospective students as customers and clients. Little wonder, then, that “if in a previous era too much deference was paid to experts, today there is little deference paid to anyone at all.” Students challenge teachers, patients challenge doctors, and so-called experts argue with other so-called experts (often in territory beyond the expertise of either). “People who claim they are ‘experts’ are sometimes only about as self-aware as people who think they’re good kissers,” he writes. Not that Nichols lets the experts off the hook—some hide behind the impenetrability of academic jargon; others have even faked the data or cooked the books. The answer to this pervasive problem lies in greater media literary and in citizens having a better idea as to what they can trust from whom.

A sharp analysis of an increasingly pressing problem, but Nichols falls short of proposing a satisfying solution.