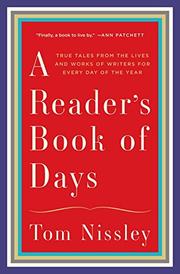 A READER'S BOOK OF DAYS

True Tales from the Lives and Works of Writers for Every Day of the Year
by Tom Nissley illustrated by Joanna Neborsky
BUY NOW FROM
AMAZON
BARNES & NOBLE
LOCAL BOOKSELLER
GET WEEKLY BOOK RECOMMENDATIONS:

A calendar and treasure trove for the bookish among us, marking events in literary history great and small, writers’ birthdays and death dates, and the like.

As compared to James Salter’s Life Is Meals: A Diner’s Book of Days (2006), eight-time Jeopardy! champion Nissley’s compendium is a little down-market; if Salter is all haute cuisine and brilliant wines, Nissley finds room for pop-cult writers such as H.P. Lovecraft and Grace Metalious, among the less-ephemeral likes of Leo Tolstoy and George Eliot. That catholicity, however, as well as Nissley’s enthusiasm for books, readers and writers, lends his collection considerable charm. Although there’s plenty of, well, book learning here, there’s also plenty of the sheer fun of reading, as when Nissley commemorates the birth of Dr. Seuss on March 2, 1904—March 2 being, coincidentally, the day, an exact century later, that Richard Ford spat on Colson Whitehead for the latter’s having dared to give him a bad review. (Quoth Whitehead afterward, “This wasn’t the first time some old coot had drooled on me.”) Nissley casts a wide net to catch the likes of the Marquis de Sade (died Dec. 2, 1814) and Haruki Murakami (born Jan. 12, 1949) among the literati; he records the day in 1969 that Kingsley Amis had the bright idea to write a book (On Drink) about drinking so that he could write off his drinking against taxes, which, Amis rightly said, “would be a tremendous achievement.” Nissley also notes the runaway best-sellerdom of the Warren Commission Report of 1964, the birth of the Guinness Book of World Records and the creation of Amazon.com, among other momentous turns in the life of bookdom. The book itself is guaranteed to occupy plenty of pleasant hours, but Nissley’s recommended reading lists are a bibliophilic bonus.

Just the thing for the book collector and trivia buff in the family.

A HISTORY OF READING
by Alberto Manguel
Nonfiction

THE CHILD THAT BOOKS BUILT
by Francis Spufford
Nonfiction

A GENTLE MADNESS
by Nicholas A. Basbanes
Newsletter sign-up