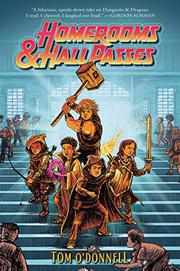 In the real world of Bríandalör, Albiorix and his band of fellow adventurers thwart evil forces, but, once a week, on Thursday nights, they meet at the local tavern for a game of Homerooms & Hall Passes, their fantasy role-playing escape. With dice and their imaginations, they transform into students who worry about class elections, algebra tests, spirit week, and the dreaded five-paragraph essay instead of magic, traps, and treasure. However, even with all his dedication to the game, Albiorix never could have predicted he and his friends would end up transported by a curse into the world of J.A. Dewar Middle School. Now they must struggle through the final two months of the semester in the lives of their characters or risk disappearing forever. Apart from remarks about pointy ears, shiny hair, and muscles, O’Donnell doesn’t give the characters much physical description, but the cover illustration and naming conventions suggest that both the Bríandalörians and middle schoolers are fairly diverse. Every chapter opens with an excerpt from the Homerooms & Hall Passes rule book, capturing the spirit of their tabletop role-playing game and foreshadowing upcoming encounters. Each adventurer learns a different lesson and grows through their humorous attempts at embodying their game personas. The villain is satisfyingly over-the-top, and his defeat befits the book’s silly sense of humor.