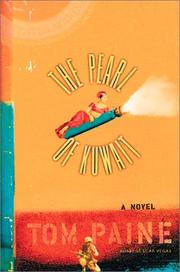 THE PEARL OF KUWAIT

The lack of serious fiction about the Gulf War is lessened somewhat by the arrival of this ferociously funny adventure by first-novelist Paine (stories: Scar Vegas, 2000). While not having crystallized the conflict’s insanity in quite the manner Joseph Heller did for WWII or Larry Heinemann for Vietnam, Paine acquits himself admirably—and, to be fair, if only in its brevity, the Gulf War was a mere commercial break compared to those earlier wars and may never receive its literary due. In terms that narrator/hero Cody Carmichael might approve of, Paine’s story can be likened to what might happen if Jeff Spiccoli of Fast Times at Ridgemont High became a marine, hitched up with not-quite-sane fellow jarhead Tommy Trang, and was dropped into the middle of the farcical film Three Kings. With prototypic surfer cool, Cody tells the story in a smooth flow of stoned beach patois that highlights the situation’s rapidly increasing madness. On the eve of war, Cody and Tommy become convinced there are untapped seams of pearls at the bottom of the Persian Gulf waiting to be dug up—and so go AWOL to retrieve them. While in the water at night, they interrupt a naked, gorgeous, 16-year-old Kuwaiti princess’s suicide attempt, and the two are whisked off to Kuwait City and honored for their accidental rescue—while Cody figures out that Tommy has fallen for the princess. War comes, Kuwait is occupied, Tommy and Cody get word that Tommy’s beloved princess has been taken captive, and they take off to rescue her again. The sheer assault of episode, action, humor, horror, and epic scenery that follows—all related in Cody’s easygoing yet easily awed dudespeak—is enough for a shelf-load of lesser novels.

An odyssey of the mad that manages to coat warfare in black humor without losing sight of the price being paid by those caught up in its deadly whirlwind.