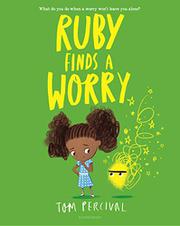 From the Big Bright Feelings series

Ruby is an adventurous and happy child until the day she discovers a Worry.

Ruby barely sees the Worry—depicted as a blob of yellow with a frowny unibrow—at first, but as it hovers, the more she notices it and the larger it grows. The longer Ruby is affected by this Worry, the fewer colors appear on the page. Though she tries not to pay attention to the Worry, which no one else can see, ignoring it prevents her from enjoying the things that she once loved. Her constant anxiety about the Worry causes the bright yellow blob to crowd Ruby’s everyday life, which by this point is nearly all washes of gray and white. But at the playground, Ruby sees a boy sitting on a bench with a growing sky-blue Worry of his own. When she invites the boy to talk, his Worry begins to shrink—and when Ruby talks about her own Worry, it also grows smaller. By the book’s conclusion, Ruby learns to control her Worry by talking about what worries her, a priceless lesson for any child—or adult—conveyed in a beautifully child-friendly manner. Ruby presents black, with hair in cornrows and two big afro-puff pigtails, while the boy has pale skin and spiky black hair.