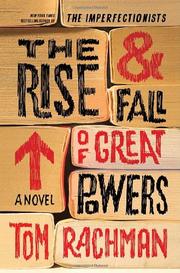 THE RISE & FALL OF GREAT POWERS

Rachman follows his best-selling debut (The Imperfectionists, 2010) with the haunting tale of a young woman reassessing her turbulent past.

In 2011, Tooly has washed up after a lifetime of wandering in a small Welsh village, where she uses the last of her money to buy a used bookstore. Twelve years earlier, in 1999, she’s a vagabond 20-year-old on the streets of New York City who talks her way into law student Duncan’s apartment by pretending it was her childhood home. Actually, her childhood was spent traveling around Asia with her father, Paul, until, in 1988, she’s scooped up in Bangkok by her feckless mother, Sarah, and falls in with a band of peripatetic misfits led by Venn, a coolly manipulative con man. The three storylines proceed along their separate time tracks to collectively explore how Tooly came to be the remote, hard-drinking young woman who seems to be marking time in Wales. We see that she’s been indelibly scarred by Venn: He imprinted her with his philosophy of relating to people only on the basis of how useful they can be to you; let her believe they had a special friendship as she followed him from country to country and scam to scam; then vanished just after she turned 21 in New York. The revelation of why he let her hang around for a decade forms the novel’s brutal climax, articulated by Venn with matter-of-fact cruelty after Tooly tracks him down. She does have gentler, more nurturing father figures: not just Paul, with whom she reconnects in a tender scene, but Humphrey, the elderly Russian émigré who tried to shelter her from Venn’s influence and softened her fall after he left—though she doesn’t realize this until years later. Still, the overwhelming emotions here are loss and regret, as Tooly realizes how she was alienated from her own best instincts by a charismatic sociopath.