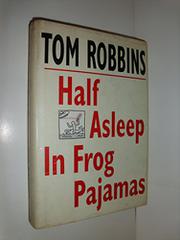 HALF ASLEEP IN FROG PAJAMAS

Robbins's wordy, phantasmagoric smorgasbord reveals a master chef filigreeing and flaying with utmost skill, But hungry readers will ultimately wonder, "Where's the beef?" His latest multilayered, zeitgeist-rich romp (Even Cowgirls Get the Blues, 1976, etc.) focuses on Gwendolyn, a money-obsessed Seattle stockbroker we meet on the day the market crashes. That same day Gwendolyn's boyfriend's born-again, formerly thieving pet monkey runs away; an arrogant tall dark stranger, an ex-stockbroker who has rectal cancer and who has come back from Africa with cosmic knowledge as to why frogs are disappearing around the world, insinuates himself into her life; her best friend/psychic, a 300-pound woman, vanishes into thin air; and a mysterious Japanese doctor comes to town to tell the world about his simple cure for colon cancer. Over the weekend Gwendolyn tries to find the monkey and her friend; at the same time she must choose between running off with the stranger, or staying with her stable boyfriend and salvaging her ruined career. Robbins mixes his trademark lighthearted turns of phrase — "the way he pronounces your name, like William S. Burroughs ordering a root beer float, sends a shudder through your lungs" — with a plot that involves global issues like environmental and economic degradation, cancer and AIDS, violence between rich and poor. But some of the serious threads are used solely to lead the reader to shaggy-dog potty jokes. The all-knowing, smug narrator tells us that the world is going to hell in a handbasket, and mystic solutions are hinted at, but all we get is a leering, smiley-face conclusion that says, Don't worry be happy, drop out, cure yourself, go get stoned in some far off place, and hope that you will have a cosmic revelation. Fans may initially be enthralled by a literary Oz's grand, terrifying show, but there's nothing but a smirking stoner behind the curtain.