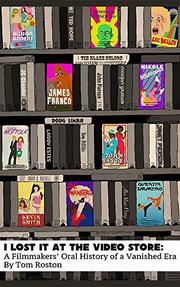 I Lost It At the Video Store

A Filmmakers' Oral History of a Vanished Era

Using interviews with a wide array of filmmakers, former Premiere editor Roston brings the magic of video stores to life.

With movies now available to view at home with a click of a mouse, it may be easy to forget that as recently as the early 2000s, there were still tens of thousands of video stores in the United States. The Friday-night trip to grab a new release was an American ritual. Only a smattering of remaining stores have survived the industry’s precipitous decline, but, as Roston describes in this engaging oral history, its significance lives on—most notably as “an irreplaceable part of the independent film movement of the 1980s and 1990s” that spawned such award-winning directors as Quentin Tarantino, Kevin Smith, and David O. Russell. “Their films are a product of video store culture, both creatively and financially,” writes Roston, who interviewed more than 20 filmmakers for the book. The book makes the case that video stores gave aspiring filmmakers a forum in which to talk about and learn their craft; Tarantino, Smith, Joe Swanberg, and Nicole Holofcener even worked as store clerks. “It was like living in a film library,” Smith recalls. “You could watch anything, and you could watch it over and over again.” For Swanberg, video-store movies were “my film school before I went to film school.” On the financial side, this book points out, stores needed product to fill their shelves—a demand that companies could satisfy very profitably by making low-budget movies with relative novices. Some of these films, such as Tarantino’s Reservoir Dogs (1992), which had a budget of about $1.5 million, got theatrical releases. “A vibrant independent film movement in theaters happened,” Tarantino says. Apart from Roston’s introduction, the book consists almost solely of verbatim quotes from his interviews, which can sometimes make for a somewhat pedestrian reading experience. However, there’s plenty of insider info here for film buffs to enjoy: “I memorized a thirty-minute sequence of Chinatown, which is how I taught myself filmmaking,” Russell recalls, for example, and Swanberg notes that renting Joel and Ethan Coen’s Raising Arizona (1987) made him realize that “not all movies are made by Steven Spielberg and star Tom Hanks.” Netflix and Redbox, among other things, may have made dinosaurs of video stores, but, as Tarantino laments here, “This next generation isn’t going to know what it’s missing....Something’s lost: that can’t be denied.”

An oral history that delves deeply into video stores and the film movement they nurtured.