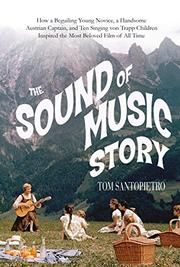 THE SOUND OF MUSIC STORY

How a Beguiling Young Novice, a Handsome Austrian Captain, and Ten Singing von Trapp Children Inspired the Most-Loved Film of All Time

A celebration of a beloved movie.

Fans of The Sound of Music will find plenty to please them in Santopietro’s (The Godfather Effect: Changing Hollywood, America, and Me, 2012, etc.) history of the sweeping musical. In the 1950s, two German movies about the von Trapp family came to the attention of director Vincent Donehue, who imagined a Broadway version with Mary Martin in the role of Maria. After complicated negotiations with the German film company and Maria herself, Donehue signed Howard Lindsay and Russel Crouse to write the play and the renowned Rodgers and Hammerstein to produce an original score. The show opened on Nov. 16, 1959, won five Tony awards and ran for three years. Soon, 20th Century Fox optioned the story; William Wyler agreed to direct, replaced by Robert Wise when Wyler decided to move to another project; and Ernest Lehman was brought in to rewrite the script. Casting Julie Andrews for the starring role was not inevitable. Although a hit on Broadway, Andrews “was a completely unknown quantity on film,” scaring investors who wanted “a real movie star with box office clout.” With support from Wise and the composers, Andrews was offered the role and grabbed it. Among contenders to play Capt. von Trapp were Rex Harrison, David Niven, Peter Finch and even Bing Crosby. Wise, though, opted shrewdly for Christopher Plummer. During filming, Andrews was exemplary, exuding “nonstop good cheer” and endless patience with the “seven potentially scene-stealing children” in the cast. The author details the painstaking complexities of producing a big-budget extravaganza, reprising every song and dance step, and the considerable task of generating buzz about the movie before it opened. All those efforts paid off: Warmly received by critics (except for Pauline Kael), it earned 10 Oscar nominations and was the highest-grossing film of 1965.

An enthusiastic close-up of movie history.