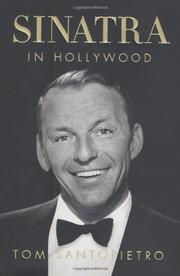 The king of the saloon singers was a top-notch actor…when he cared to be.

So argues Santopietro (Considering Doris Day, 2007, etc.), who proves an ideal guide to Ol’ Blue Eyes’ spotty career as a screen actor. Combining a fan’s ardor and enthusiasm with keen critical insight, he convincingly makes the case for Sinatra as a major acting talent while taking the famously mercurial entertainer to task for wasting his prodigious gifts on frivolous projects. In conversational prose, Santopietro covers Sinatra’s family life, romances and recording career as they relate to his picture making, demonstrating an encyclopedic knowledge of every theatrical and television film’s production details. The author analyzes each movie, often scene-by-scene, wittily explaining what works, what doesn’t and why. Clunkers like The Kissing Bandit receive the same close attention as triumphs like On the Town and The Man with the Golden Arm, the better to fully explicate the evolution of Sinatra’s craft and attitude toward the medium. Santopietro is engagingly thoughtful about the sources of the Sinatra mystique. He draws intriguing parallels between the singer’s storied insistence on “one take” and his neurotic drive to banish boredom and loneliness. The author relates Sinatra’s distinctively snappy way with a line of dialogue to his masterly phrasing of lyrics as a singer. Readers less inclined to this sort of Actors Studio musing will content themselves with irresistible gossip about Sinatra and various Hollywood legends, plus an authoritative accounts of the glory days of the MGM musicals that cemented Sinatra’s screen stardom. Film buffs will find much to savor as well. The section on The Manchurian Candidate, for example, illuminates the greatness of that strange film and of Sinatra’s performance. The Rat Pack, the Mafia, the washouts and comebacks…every aspect of the legend is intelligently addressed, but Santopietro’s interest is in Sinatra’s work. In the final analysis, that’s what fascinates.

A terrifically lucid and entertaining look at an undervalued area of Sinatra’s achievement.