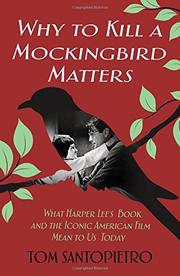 WHY TO KILL A MOCKINGBIRD MATTERS

A detailed account of a classic novel’s context, transformation, and acclaim.

Translated into 40 languages, with sales of some 40 million copies since its publication in 1960, Harper Lee’s To Kill a Mockingbird has become famous worldwide. Adapted on film, it earned its star, Gregory Peck, an Oscar for his portrayal of Atticus Finch, a role that defined him for the rest of his career. In an affectionate homage, media journalist and Broadway show manager Santopietro (The Sound of Music Story: How a Beguiling Young Novice, A Handsome Austrian Captain, and Ten Singing von Trapp Children Inspired the Most Beloved Film of All Time, 2015, etc.) asserts that Lee’s novel still sends a relevant message to 21st-century readers. “By wrapping a nostalgic look back at childhood around a clear-eyed gaze at how racism diminishes and damages an entire community,” he maintains, Lee offers a way to perceive “America’s racial history with a fresh set of eyes.” Most of Santopietro’s book, though, does not elaborate any more deeply on why Lee’s novel matters, or to whom. He covers ground that Joseph Crespino examined in his recently published Atticus Finch: Lee’s youth in Alabama; her relationship with her father, a lawyer and model for Atticus; her friendship with Truman Capote; the prolonged writing and revising of the novel, which became an immediate bestseller; and her subsequent writing career, which ended in the long-awaited publication of Go Set a Watchman. To this biographical overview, Santopietro adds a close look at the movie’s creation: with Alan Pakula as producer, Robert Mulligan as director, and Horton Foote as screenwriter; and with Gregory Peck (rather than Lee’s ardent hope of Spencer Tracy) to play Atticus. The author details casting decisions, especially the search for the perfect girl to play Scout; and the work of designing costumes and constructing sets on the Universal backlot to bring Lee’s Alabama town to life. He conveys, as well, critics’ reception of the movie and summarizes the major figures’ post-Mockingbird careers.

For Mockingbird and Harper Lee devotees.