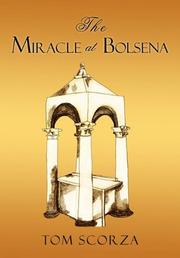 THE MIRACLE AT BOLSENA

Young Matteo narrates the real story surrounding the Miracle at Bolsena in this medieval mystery/coming-of-age novel.

In Umbria, 1263, a miracle happens: a priest says the words “This is my body” over the host during mass and the bread begins to bleed, staining the altar cloth. Any such miracle must be investigated, but it’s a delicate matter amid the roiling religious and political stew of the time. Such affairs are far from foundling Matteo’s mind; he loves the peaceful round of work and play in his master’s and lady’s vineyards, and loves his makeshift family. At almost 14 and full of bouncy self-confidence, though, Matteo is ready for adventure. When a message comes from the master’s brother asking for unofficial help looking into the mystery, going along to Bolsena sounds like an exciting trip—and it is—but also a dangerous one. The miracle at Bolsena will turn out to have a meaning for Matteo that he never could have imagined. Thriller writer Scorza (Lady Justice, 2000) has created an engaging story full of compelling characters and events, and each roadway encounter gives Matteo a chance to learn about politics, religion and more. A daring rescue of Mohammed the Jew and Moses the Muslim, for example, sparks discussion of religious tolerance in Spain. Conversations can become didactic, but Matteo’s boundless curiosity and love of showing off help justify the whiff of schoolroom. He’s no teacher’s pet, possessing an appropriately earthy medieval sensibility. For just that reason, though, and despite the tragedies he’s witnessed, Matteo’s ultimate isolating decision doesn’t ring true: he seems much too deeply engaged with life and people. Some historical details seem off, as in the casual treatment of valuable books, and Scorza’s diction wavers from casual to stuffy to overdone. Matteo’s story stands on its own but is framed by a present-day narrative about finding the manuscript that delves distractingly deeply into art history.

An appealing hero and plenty of action enliven this historical mystery that effectively blends adventure with learning.

THE BROTHERS OF GLASTONBURY
by Kate Sedley
Newsletter sign-up