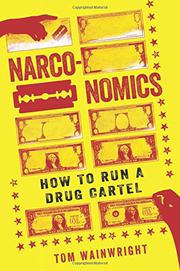 How to Run a Drug Cartel

In his first book, seasoned journalist Wainwright asks a radical question: what if we stopped looking at drug cartels as armies of faceless gangsters and instead analyzed them as innovative global businesses?

Like many journalists, Wainwright is critical of the war on drugs and its ineffective tactics. But during his tenure as a correspondent in Mexico City for the Economist, the author observed that high-level drug dealers are successful often because they understand effective management strategies. The full-body tattoos of the Salvadoran maras encourage loyalty among gang members, who are essentially lifelong employees. Mergers between Mexican gangs help expand international trade, while rival gangs spark competitive innovation. Wainwright suggests that the cocaine trade is eerily similar to the business approach of Wal-Mart, which holds a “monopsony” over its suppliers. The most astonishing chapter covers Internet commerce in the “deep web,” where pills and stolen credit card numbers are effortlessly exchanged. Using a bogus account, Wainwright discovered that anonymous participants employ a rating system to assess buyers and sellers, just like eBay, keeping customer service at high levels. “Even when I send a deliberately annoying message to a meth-pipe dealer called ‘vicious86,’ asking if he does custom engraving of his pipes for gift orders, he sends a nice reply regretting that he can’t but wishing me luck in finding someone who will,” writes the author. Wainwright has a good sense of humor, and he describes himself as a “not very brave business journalist,” yet his book is courageous on several levels. He not only ventured into brutal prisons and Andean coca fields, but he also approached illicit drugs from a thoughtful new direction. In order to combat the cartels, governments must work together and evaluate the cost-benefit of their social policies as well as the prices of firearms and flak jackets. In a way, Wainwright challenges everyone at once—the dealers, the drug czars, and the bystanders in between.

A daring work of investigative journalism and a well-reasoned argument for smarter drug policies.