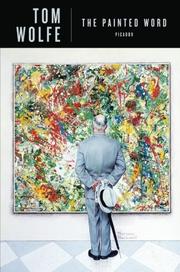 No question about it, Tom Wolfe is speaking for the yahoos in this little essay—it appeared in its entirety in Harper's Magazine, and though the Art World will no doubt assiduously ignore Wolfe's Bronx cheers, a lot of ordinary philistines will say "Right on!" Wolfe's premise is simple: since WW II modern art has been characterized by the primacy of Theory. "As for the paintings—de gustibus non disputandum est. But the theories, I insist were beautiful." The museum exhibits in the year 2000 will feature the works of the critics—Harold Rosenberg, Clement Greenberg, Hilton Kramer and Leo Steinberg. But Greenberg most of all, since it was he who supplied The Word without which Abstract Expressionism (the dominant postwar style) is incomprehensible. The essential principal which has informed contemporary art, says Wolfe, is flatness. Three-dimensional effects are pre-modern; in fact they've been around since the Renaissance. Ugh! How to preserve "the integrity of the picture plane" and the disputes it engendered among the culturati were worthy of the how-many-angels-can-dance-on-the-head-of-a-pin debates of medieval scholasticism. Tout le monde, that is to say, a handful of collectors, curators and critics, had a field day. The public (the public?) was left light years behind, gawking. The appeal of Wolfe's essay, for all its distortions and simplifications, and they are legion, comes from his very just observation that contemporary art has, by and sadly large, been smugly elitist, its market and its value defined by a small clique. Less easy to accept is Wolfe's claim that the pictures illustrate the texts; or, that an actual conspiracy exists between artist and critic. Wolfe understands the motives of a Rothko or a Stella or even a Pollock poorly. And yet, his Populist blast against the reductivism of contemporary art from Abstract Expressionism to Minimalism to Conceptual Art-a process of eliminating more and more elements from the painting—is a shaft well-aimed—especially if you think that what's lacking is visual reward and emotional impact.