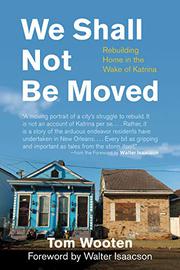 WE SHALL NOT BE MOVED

Rebuilding Home in the Wake of Katrina

Tales of community activists who salvaged their neighborhoods from natural disaster and governmental neglect in New Orleans.

After participating in a Harvard fellowship to volunteer with and research the stories of Hurricane Katrina victims, Wooten (co-author: No One Had a Tongue to Speak: The Untold Story of One of History’s Deadliest Floods, 2011) moved to New Orleans to more fully immerse himself in the community’s rebuilding efforts. Focusing on five distinct neighborhoods, he allows residents and organizers to convey their dismay at government failure, their pride in their communities, and their resilience in tackling unwieldy projects, from gutting damaged homes to applying for charter school status. Many of these neighborhoods were marked for “redevelopment” by the Bring New Orleans Back Commission, an ill-conceived mayoral project that essentially recommended that neighborhoods like the hard-hit Lower Ninth Ward be bulldozed and turned into parks. Facing these kinds of odds, the scrappy New Orleanians who refused to kowtow to city officials and outside consultants command the utmost respect. They also provide excellent examples of how communities facing similar threats (blight, poverty, environmental problems and crime) can work together to improve living conditions, whether or not natural disasters loom on the horizon. Readers won’t fault Wooten for his sincerity in gathering these stories, and many of his subjects possess strong voices—e.g., octogenarian Phil Harris, who pragmatically speaks of saving his wife and son from the floodwaters, and Father Vien The Nguyen, who narrates the history of New Orleans’ significant Vietnamese population. However, potentially compelling tales often get lost in endless re-creations of committee meetings, charter school board applications and fundraising rallies. The author’s tone is a problem as well. Wooten vacillates between addressing a general audience interested in the social ramifications of Katrina and presenting an overview of urban planning better suited to a civics textbook.

A well-intentioned but prosaic book.