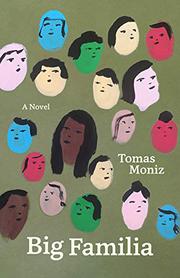 A quiet, thoughtful story about coming-of-age at middle age.

Juan Gutiérrez is enjoying a life of pleasant routine. He and his ex-wife share mostly amicable custody of their teenage daughter, Stella. He’s dating a smart, handsome man named Jared. He sees his buddies twice a week at a crappy local bar. Sure, he could stand to lose a few pounds, but he’s working on it, just like he’s preparing himself for Stella’s leaving home and starting college. But just as Juan and Jared are sharing more of their lives with each other, it becomes clear that they want different things from their relationship. Then Stella gets pregnant. And Juan’s father dies. With his first novel, poet Moniz tells a story that is simultaneously timeless and quite timely. Juan is Chicanx—Stella taught him the term—and bisexual. Jared is black and gay. Characters deal with and talk about racism and homophobia, gentrification and police brutality. These are some of the challenges they endure as they navigate universally human experiences like connection, community, birth, and death. Juan is an engaging narrator, someone who is fully aware of his limitations and is trying to change—for himself and the people he cares for. None of these characters exist solely—or primarily—as a portrait of “difference” because white and straight aren’t default categories here. Being sexually and romantically attracted to men is not a problem for Juan; his problem is that he is emotionally unavailable and uneasy about commitment, and it turns out that neither of those problems is insurmountable.

Diverse characters and a deeply likable protagonist make this a standout debut.