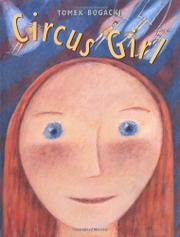 Bogacki’s simple, visual reminiscence about the beginnings of a boyhood friendship is, like his earlier picture-book memoir My First Garden (2000), nuanced and subtle. The first-person narrator recalls a marvelous week from childhood: a circus caravan comes to his small town, bringing a temporary classmate, the young acrobat that he remembers only as Circus Girl. The Circus Girl befriends both the narrator and Tim, “the smallest one in the class,” whose isolation from his classmates has been the one thing that anyone knew about him. Circus Girl’s impressive ability to balance while standing on an elephant and on a pony matches the seemingly easy grace with which she makes friends for herself and in the process creates friendship between the two boys. Expressive, gently hued drawings in what could be pastel and colored pencil recreate the moments in the narrative in irregularly shaped frames across each two-page opening. The frames, in soft focus as if remembered across time and distance, fill the space, each an impressionistic glimpse through a window of memory. Young readers will need a measure of patience to mine the depths of this quiet tale, but multiple readings will turn up new observations. Some will find it frustrating that the eponymous character remains nameless in the narrator’s retelling—she serves only as the catalyst for the friendship between the narrator and Tim. Still, her brief sojourn in the boys’ lives has a lasting effect. Understated and touching. (Picture book. 4-8)