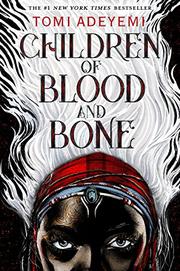 CHILDREN OF BLOOD AND BONE

From the Legacy of Orisha series, volume 1

Seventeen-year-old Zélie and companions journey to a mythic island seeking a chance to bring back magic to the land of Orïsha, in a fantasy world infused with the textures of West Africa.

Dark-skinned Zélie is a divîner—someone with latent magical abilities indicated by the distinctive white hair that sets them apart from their countrymen. She saves Princess Amari, who is on the run from her father, King Saran, after stealing the scroll that can transform divîners into magic-wielding maji, and the two flee along with Zélie’s brother. The scroll vanished 11 years ago during the king’s maji genocide, and Prince Inan, Amari’s brother, is sent in hot pursuit. When the trio learns that the impending solstice offers the only chance of restoring magic through a connection to Nana Baruku, the maternal creator deity, they race against time—and Inan—to obtain the final artifact needed for their ritual. Over the course of the book allegiances shift and characters grow, change, and confront traumas culminating in a cliffhanger ending that will leave readers anxiously awaiting the next installment. Well-drawn characters, an intense plot, and deft writing make this a strong story. That it is also a timely study on race, colorism, power, and injustice makes it great.

Powerful, captivating, and raw—Adeyemi is a talent to watch. Exceptional.