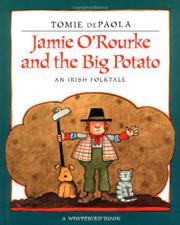 JAMIE O'ROURKE AND THE BIG POTATO

Lazy Jamie O'Rourke doesn't lift a finger, even after his wife hurts her hack digging the "praties" they depend on; but he does catch a leprechaun, who gives him a seed that grows into a potato so large that it takes the combined efforts of the village to dig it and, subsequently, to eat it—"until no one wanted to see or hear of potato again." DePaola's "Note About the Story" tells more of his own family history than of "the short tale that inspired" this one, which is totally unsourced; presumably, it predates the tragedy of the Potato Famine. Anyway, as retold here, it makes a cheery picture book, with the artist using the lighter, brighter side of his palette and including some affectionate caricatures of the Irish in his decorative illustrations. Attractive and amusing. (Picture book. 4-8)