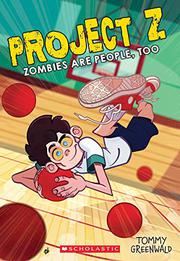 ZOMBIES ARE PEOPLE, TOO

From the Project Z series, volume 2

A zombie escapee is recaptured by the top-secret government agency that created him.

The smartest kid in the fifth grade, Arnold Z. Ombee (a zombie, obvi), uses his superintelligence to tutor a struggling classmate. Now Arnold is accepted—maybe even popular. But it’s not just the cool kids who have their eye on him. Arnold catches an oddly familiar man spying on him and his human family, the Kinders. Soon after the encounter, the police inform Arnold’s school that an “undocumented fugitive” is in attendance. The man—a Dr. Grassmere—convinces Arnold’s family to let him take Arnold back to the Territory for a week of testing. But the “tests” serve a more sinister purpose: brainwashing Arnold and his “fellow afterlifes” and turning them into superstrong zombie warriors! Will Arnold snap out of it and remember his human life? Or is it already too late? This sequel one-ups A Zombie Ate My Homework’s (2019) infectiously hilarious tone with more over-the-top sequences, amplified by Bardin’s cartoon spot illustrations. Arnold alternates some first-person narration duties with classmate Evan, which adds an extra dose of character development to corpse-white Arnold’s diverse cast of friends, such as revealing that Evan is a cancer survivor. The messages about acceptance and belonging are timely—although using the term “undocumented” to refer to a zombie does leave a bit of a bad taste.