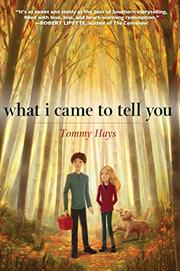 WHAT I CAME TO TELL YOU

Two lovable, grief-stricken children try to find their footing after their mother’s death in a senseless accident.

Twelve-year-old Grover and his little sister, Sudie, have already lost their mother, and now their father, director of the Thomas Wolfe house in Asheville, N.C., has practically disappeared as well, throwing himself into his work. Grover and Sudie spend most of their time in the city’s Bamboo Forest, where Grover creates intricate weavings from bamboo, leaves and grass. When kids Emma Lee and Clay move in next door from Roan Mountain, Grover and Sudie discover they have the loss of a parent in common; Emma Lee and Clay’s father was killed in Iraq. In addition to grief, this ambitious offering explores the meanings and value of art, faith and destiny, and Appalachian mountain culture. In a scene related to the latter, a student throws the slur “hillbilly” in Emma Lee’s direction, and a boy named Daniel remarks that “ ‘Hillbilly’ is kind of like the N-word...except it’s talking about mountain people.” In some instances, the text veers toward the didactic, but the compelling characters and engaging prose put it squarely in the win column.

Readers will be quickly and surely drawn in by quirky siblings Grover and Sudie, rooting for them to find a measure of peace and happiness in the wake of tragedy.