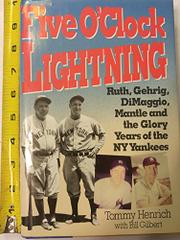 Ruth, Gehrig, DiMaggio and the Glory Days of the New York Yankees

Feather-light but thoroughly agreeable recollections of a fulfilling career in professional baseball, from the New York Yankee dubbed ``Old Reliable.'' With three years out for service with the Coast Guard during WW II, Henrich played for the Bronx Bombers from 1937 through 1950, when a bum knee finally forced him into retirement at age 38. The hard-hitting right-fielder's championship seasons encompassed some of the sport's enduring moments, including the April day in 1939 when a dying Lou Gehrig took himself out of the lineup, ending his iron-man record at 2,130 consecutive games played. On a more personal level, Henrich was the lucky batter when Mickey Owen, the Brooklyn Dodgers catcher, dropped a third strike in the turning- point fourth game of the 1941 World Series, permitting the American League pennant winners to sweep on to the title. Propelled by memories like this, plus graceful tributes to a host of diamond personalities (Joe DiMaggio, Whitey Ford, Lefty Gomez, Johnny Mize, Don Newcombe, Phil Rizzuto, Jackie Robinson, Casey Stengel, et al.), the chronological narrative moves along at a rapid, albeit perhaps self-ingratiating, clip. Looking back with evident delight on his days as a member of memorable clubs, Henrich has harsh words for only a handful of umpires he deemed ``homers,'' head-hunting pitchers, and tight-fisted general managers who kept his annual earnings in the low five-figures range. In closing, however, Henrich makes a point of castigating George Steinbrenner for tarnishing the image of his beloved Yankees. As nice a baseball memoir as fans and nostalgia buffs are likely to find any time soon. (Eight pages of photographs—not seen.)