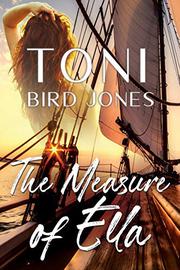 THE MEASURE OF ELLA

Jones’ debut novel tells the story of a woman who finds herself on a criminal adventure on the open waters of the Caribbean.

Ella Morgan is ready to move on. Her father died a year ago, leaving her without any parents, but she’s about to realize her dream of opening her own restaurant in the Florida Keys, far away from her childhood home in New England. She just needs a little help. She was counting on money from selling her father’s tugboat, which turns out to be junk. And just before finding this out, she hears that Davis, the drug runner that she’s been seeing, has been killed by pirates during a raid. Seeing no other choice, she accepts an offer from Rich, her fellow sailor, to help him pull off a drug run of his own. Ella goes on to battle storms, startling betrayals, pirates, and her own conscience—but she eventually finds herself more than willing to torch a boat in the name of revenge. She also discovers that Davis had some secrets, as do other people around her. Jones knows how to hook readers and keep the action flowing. In the very first scene, for example, she shows how capable Ella is and how treacherous sailing can be when a client’s son is nearly lost in rough waters. The prose is detailed but straightforward, as in this passage, during the protagonist’s first tussle with pirates: “Ella faced south toward the sound of the approaching boat and slipped her hand into her pocket, gripping the cold metal of the gun, trying to suppress the panic running through her and anxiously scanning the pitch black sea.” The text sometimes gets bogged down by sailing jargon, but it’s definitely something that Jones knows a lot about, having delivered boats herself.