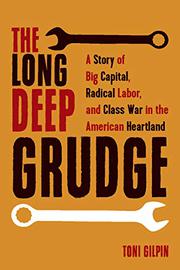 A history of the relationship between the Farm Equipment Workers union and “International Harvester, once the country’s fourth-largest corporation and second to none in its anti-union animus.”

Labor historian Gilpin (co-author: On Strike for Respect: The Clerical and Technical Workers' Strike at Yale University, 1988) has firsthand knowledge of the Farm Equipment Workers union and its relationship with International Harvester. Her father was there at the beginning of the FE, “a small union, now long defunct,” and later moved on to the United Auto Workers Union, which, writes the author, was “a ubiquitous presence as I was growing up in the 1960s and ’70s—when unions still had more active members than retirees and newspapers maintained labor beats.” In 1885, IH’s iron molders called a strike, which went nowhere until they turned to collective action, taking the whole factory out. Because IH was the most anti-union company in America, its leaders held out longer than any other before accepting unions. This complex, well-researched, dense text includes the infamous Haymarket Riot and countless tales of bitter relations between labor and corporate elements. IH officials did much to try to forestall the unions, establishing industrial councils and employee representative plans, but it was not enough. The FE was a radical, multicultural union with seasoned, skilled, and dedicated organizers. It took them years of work to win coverage for unskilled labor and eliminate piecework. Eventually, they took their fight to the new IH plant in Louisville to fight the Mason-Dixon wage differential, a major issue. By the end of World War II, IH had accepted collective bargaining, but it wasn’t the end of the fight, as IH still hated FE and used the Congress of Industrial Organizations and the Taft-Hartley Act to help maintain their control. Gilpin follows every aspect of this “long, deep grudge” (sometimes too deeply for general readers), creating a useful labor history that could spark renewed interest in unions at a time when “activists are back at the drawing board.”

A comprehensive account that will appeal most to business historians and activists looking for direction.