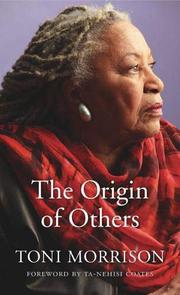 THE ORIGIN OF OTHERS

Essays focused on an overarching question: “What is race (other than genetic imagination), and why does it matter?”

Melding memoir, history, and trenchant literary analysis, Nobel Prize laureate Morrison (Emeritus, Humanities/Princeton Univ.; God Help the Child, 2015, etc.) offers perceptive reflections on the configuration of Otherness. Revised from her Norton Lectures at Harvard, the volume consists of six essays that consider how race is conceived, internalized, and culturally transmitted, drawing in part on writers such as Hemingway, Faulkner, Flannery O’Connor, Joseph Conrad, Harriet Beecher Stowe, and the African writer Camara Laye, whose novel The Radiance of the King Morrison greatly admires. Laye told the story of a white man, stranded and destitute in Africa, struggling to maintain his assumptions of white privilege. For Morrison, the novel illuminates the pressures that “make us deny the foreigner in ourselves and make us resist to the death the commonness of humanity.” She also offers insightful glosses into her own aims as a novelist. “Narrative fiction,” she writes, “provides a controlled wilderness, an opportunity to be and to become the Other. The stranger. With sympathy, clarity, and the risk of self-examination.” In Beloved, for example, she reimagined the story of Margaret Garner, a slave who had killed her children rather than see them enslaved, as she had been. In A Mercy, she examined “the journey from sympathetic race relations to violent ones fostered by religion.” In Paradise, she delved into the issue of hierarchies of blackness by looking at “the contradictory results of devising a purely raced community”; she purposely did not identify her characters’ race in order to “simultaneously de-fang and theatricalize race, signaling, I hoped, how moveable and hopelessly meaningless the construct was.” In God Help the Child, Morrison considered “the triumphalism and deception that colorism fosters.” Her current novel in progress, she discloses, explores “the education of a racist—how does one move from a non-racial womb to the womb of racism”?

As sharp and insightful as one would expect from this acclaimed author.