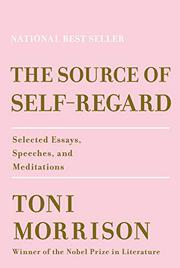 THE SOURCE OF SELF-REGARD

A prominent public intellectual even before being awarded the Nobel Prize in Literature in 1993, novelist Morrison (Emerita, Humanities/Princeton Univ.; The Origin of Others, 2017, etc.) has lectured and written about urgent social and cultural matters for more than four decades. Her latest collection gathers more than 40 pieces (including her Nobel lecture), revealing the passion, compassion, and profound humanity that distinguish her writing. Freedom, dignity, and responsibility recur as salient issues. Speaking to the Sarah Lawrence graduating class in 1988, Morrison urges her listeners to go beyond “an intelligent encounter with problem-solving” to engage in dreaming. “Not the activity of the sleeping brain, but rather the activity of a wakened, alert one” that can foster empathy—a sense of intimacy that “should precede our decision-making, our cause-mongering, our action.” To graduates of Barnard in 1979 she recasts the fairy tale of "Cinderella," focusing on the women who exploit and oppress the heroine, to urge her audience to “pay as much attention to our nurturing sensibilities as to our ambition.” “In wielding the power that is deservedly yours,” she adds, “don’t permit it to enslave your stepsisters.” In an adroit—and chillingly prescient—political critique published in the Nation in 1995, she warns of the complicity between racism and fascism, perceiving a culture where fear, denial, and complacency prevail and where “our intelligence [is] sloganized, our strength downsized, our privacy auctioned.” “Fascism talks ideology,” she writes, “but it is really just marketing—marketing for power.” Speaking at Princeton in 1998, she considers the linguistic and moral challenges she faced in writing Paradise, one of many pieces offering insights into her fiction. Aiming to produce “race-specific race-free prose,” she confronted the problem of writing about personal identity “in a language in which the codes of racial hierarchy and disdain are deeply embedded”—as well as the problem of writing about the intellectually complex idea of paradise “in an age of theme parks.”

Powerful, highly compelling pieces from one of our greatest writers.