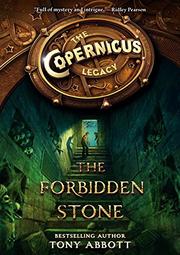 From the Copernicus Legacy series, volume 1

Four precocious preteens and a distracted astrophysicist travel to Europe to unravel a mystery that has already claimed several lives.

The arrival of a coded email reveals that 12-year-old Wade Kaplan’s antique star map is not just a beautiful artifact, but a key. Unfortunately, as Wade, his astrophysicist father and his stepbrother, Darrell, discover, the map is only the first of many clues. The three would-be adventurers are joined by Wade’s technophile cousin, Lily, and her bookish friend, Becca. The five follow the clues to Berlin, where Dr. Kaplan discovers that he is the only remaining member of the Asterias, a group run by his murdered mentor. The academic quest quickly becomes deadly as a ruthless group competes for the 12 hidden relics that can save the world and unlock the Copernicus Legacy. Filled with riddles and ciphers, this first of 12 installments will keep readers intellectually stimulated as well as entertained. The stepbrothers’ bond, a budding crush and a mystery that plays off of real historical figures and facts make this more than a pedestrian whodunit. With engaging characters, a globe-trotting plot and dangerous villains, it is hard to find something not to like.