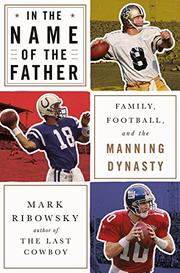 IN THE NAME OF THE FATHER

The Manning quarterbacking family has figured prominently in the nation’s football landscape for nearly 50 years. In his latest book, veteran biographer Ribowsky (Hank: The Short Life and Long Country Road of Hank Williams, 2016, etc.) chronicles the careers of father Archie and sons Peyton and Eli. The author draws interesting comparisons between the obsessive, publicity-hungry Peyton and the quiet, phlegmatic Eli. Whereas the former has superior statistics and will be a first-ballot Hall of Famer, the latter has just as many Super Bowl wins (two) and a reputation as a better performer in the clutch. Ribowsky also illustrates how Archie, whose father committed suicide, made a point to be more invested in the lives of his children. Unfortunately, in telling this family history through the conduit of the American South and race, the author never misses an opportunity to take cheap shots at the protagonists. Thus he accuses Archie of “racism acceptance,” adding that while there is no evidence that the Mannings of Drew, Mississippi (where Archie grew up), joined the Ku Klux Klan, “neither is there any reason to believe they opposed” it. Ribowsky also wields his acerbic pen against Manning contemporaries: Atlanta Falcons quarterback Matt Ryan is a “choker,” while the decision of University of Florida star Danny Wuerffel to decline a spot on Playboy’s All-America team was nothing but “self-serving treacle.” Moreover, the author’s put-downs are compounded by numerous errors. Texas Western won the NCAA men’s basketball championship in 1966, not 1965. Ryan Zimmerman plays for the Washington Nationals, not the Philadelphia Phillies. The assassination of Martin Luther King Jr. occurred before that of Robert F. Kennedy, not after. When President Barack Obama called Peyton following the latter’s loss in the Super Bowl, Obama was in office for more than a year, not “weeks into his first term.”

The book has its moments, but not enough to overcome Ribowsky’s flubs and irksome penchant for mockery.

THE LAST COWBOY
by Mark Ribowsky

THE MANNINGS
by Lars Anderson
Nonfiction