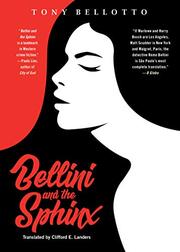 BELLINI AND THE SPHINX

Originally published in Portuguese in 1995, Bellotto’s series opener introduces Remo Bellini, a private eye in the tradition of Spade and Marlowe but distinctively Brazilian.

Bellini hates his first name. Born a twin, Remo has lived in the shadow of his brother, Romulo, who died at 2 days old. Since then, Romulo has always been the brother who would have been everything Remo isn’t: an obedient son, an academic success, a lawyer like his father, Tulio. Remo went to law school but hated practicing law, so now he works for Lobo Private Investigations. Like most private eyes, he spends a lot of time getting the goods on cheating spouses. So he’s intrigued when he catches a case that turns the formula on its head. Samuel Rafidjian, an eminent pediatric surgeon, wants to find an exotic dancer who worked at the Dervish, a strip club on São Paulo’s seedy Rua Augusta. After a six-month fling with the doctor, the woman abruptly disappeared, and Rafidjian is desperate to find her. No one at the Dervish admits to knowing the missing dancer. Manager Khalid Tureg says she never worked there and assures Bellini that he’ll never find her because “women are an illusion.” Meanwhile, Bellini finds himself awash in women: Dora Lobo, the boss who sends him on this crazy case; Camila and Dinéia, two dancers answering the missing woman’s description; Fatima, a prostitute who’s obsessed with him; Beatriz, the law student he’s obsessed with; even his mother, who calls him asking him to please make up with his stubborn father. The only woman who eludes him is the one he needs most urgently to find, Ana Cíntia Lopes, the mysterious object of Dr. Rafidjian’s sincere if misguided affection.

Bellotto’s detective, less ironic and more earnest in his angst than his American counterparts, proves a compelling guide to the passionate world of São Paulo.