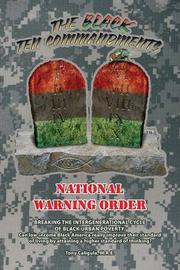 In response to Ossie Davis’ 1965 call for a “Black ten commandments,” Caligula has composed a regimen of activities he thinks will “provide a new standard of leadership—one that is not autocratic, doesn’t thrive on instability, operates in a more transparent manner, and disseminates a plan for the Black community.” Much of the book (the first 400 pages) is spent attempting to establish the economic, political, psychological, and spiritual context for black America. The commandments, when they finally appear, are presented as solutions to the myriad problems faced by African-Americans, explained both in their philosophical dimension and practical application. The concerns of the commandments, which retain a basis in Scripture, include setting proper priorities, rejecting white paternalism, refocusing on the nuclear family, reinvigorating the black church, and other goals that the author sees as strengthening the position of the larger African-American community. A mix of conservative faith-and-family initiatives combined with political agitation in the courts and support for black businesses, Caligula’s platform is essentially a rebranding of long-promoted improvement strategies articulated in a franker and more forceful tone. An Army veteran, Caligula uses U.S. military principles, including the Military Problem Solving Process, as a basis for both community- and self-improvement. He writes with clarity and confidence, though his idiosyncrasies are numerous and frequently distracting. (He spends a surprising amount of time discussing comparative mythology, for example, and insists on always spelling African as “AfriCAN.”) Though many of his complaints and criticisms about the relationship between white and black America are valid, the author holds some controversial opinions in regards to both mainstream Christianity (which he calls “Fascianity...biblical-based fascism akin to Nazism”) and the American political system (“Liberal foxes and conservative wolves are two sides of the same coin”). He is no fan of President Barack Obama (whom he calls a “selfish trickster”), and has little patience for what he terms “Black victim ‘excuse-aholics.’ ” It’s a tough love approach to say the least, one that will likely prove too tough for many readers.

A thorough, if extreme, proposal for making African-Americans self-reliant.