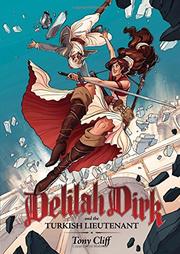 DELILAH DIRK AND THE TURKISH LIEUTENANT

From the Delilah Dirk series, volume 1

In Cliff’s swashbuckling print debut, a tea-loving Turkish janissary must choose his future path after his quiet life is turned upside down by an encounter with a brash adventuress.

Selim’s modest career as a soldier in early-19th-century Constantinople comes to an ignominious end after the agha finds fault with his interrogation of their new English-speaking prisoner. Not only does Delilah Dirk escape soon after her interview with Selim, she also helps him avoid execution, leading everyone to assume they are in cahoots. Left with no other options, he flees with Dirk on her flying boat, but it doesn’t take long for Dirk to create more trouble. Eisner-nominated as a webcomic, the graphic novel is glorious in print. The rich, saturated colors and dashing linework pop off the page, and the author wisely lets his characters’ dynamic body language and expressive faces mostly speak for themselves during the action sequences. Dirk’s fearlessness and verve are both appealing and exhausting: Readers will sympathize with Selim’s quandary when he is reluctant to end a peaceful interlude in a friendly village and Dirk is eager to move on.

Fast-paced and unabashed fun, this romp will leave readers longing for additional installments.