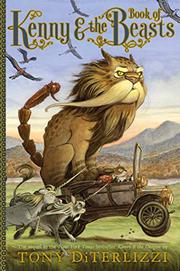 KENNY & THE BOOK OF BEASTS

From the Kenny & the Dragon series

A long-eared young hero takes on a witch bent on trapping rare legendary creatures in a magical book.

Not so much a pastiche of E. Nesbit’s short story “Book of Beasts” as an original novel with cribbed elements, this adventuresome outing regathers and expands the animal cast of DiTerlizzi’s 2008 reworking of The Reluctant Dragon (titled Kenny & the Dragon) for a fresh challenge. As if coping with a dozen baby sisters and tending the bookshop of his questing mentor, Sir George E. Badger, aren’t hard enough, Kenny Rabbit feels abandoned by his best friend, dessert-loving dragon Grahame—who happily recognizes the supposedly mythical manticore that springs from the pages of a grimoire as an acquaintance from olden days. Avid to collect magical creatures of all sorts, the book’s owner, sinister opossum Eldritch Nesbit, tempts Kenny into an ill-considered bargain. But once he sees not only the manticore, but Grahame too snapped up, Kenny joins allies, notably his redoubtable crush Charlotte the squirrel, in a rumbustious rescue that also frees a host of unicorns and other long-vanished marvels. Aside from the odd griffin or al-mi’raj (a horned rabbit from Persian lore and an outlier in an otherwise Eurocentric cast), everyone in the lively, accomplished illustrations, from Kenny’s impossibly adorable sibs on, sports amusingly anthropomorphic dress and body language.

This oblique homage to a now-creaky classic is lit by friendships, heroic feats, and exceptional art.