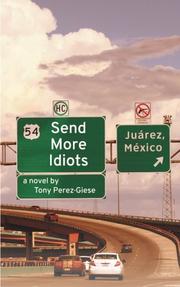 This densely populated, darkly comic tale starts off with a wallop: “The Mexican punched me so hard that I said my mother’s name, which is interesting, because I don’t like my mother.” This isn’t just an easy gag, as family dynamics are at the heart of this south-of-the-border adventure, which has atmosphere to burn. Jon Lennox, an unhappily married Colorado lawyer, ventures to El Paso after his brother, Chris, a real estate agent—and, in Jon’s estimation, a total screw-up—is apparently kidnapped. But several things about the case don’t add up. If Chris was abducted, why is there no ransom demand? And if Chris, as one private investigator theorizes, “might have been involved in some things not pertaining to real estate,” then why hasn’t his body been found? As Jon investigates, he befriends Iraan, a down-on-his-luck detective who tells him that he “doesn’t fit the profile of the grieved relative.” He also meets Jimmy, an Iraqi war veteran; and Sway, a local hustler. Chris, however, serves as the story’s narrator, and the novel might have been better served if Jon picked up the narrative once Chris disappears early on. That said, Perez-Giese evocatively immerses readers in the ethical morass and moral vacuum of the border drug wars, using local authorities to orient readers on who the players are, how they operate, and the stakes involved. He also has a good eye, and nose, for setting a scene: “The room smelled of microwave popcorn and disinfectant, and the phones rang without being answered,” he writes of one police station waiting room. The pieces of the puzzle eventually fit together—some more seamlessly than others. Meanwhile, tense confrontations and odd character quirks (such as a drug lord’s predilection for the original Star Trek) keep the momentum going.

Entertaining, escapist fare; to paraphrase one of Perez-Giese’s characters, it’s a great idea with good execution.