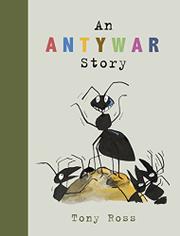 The story of a soldier ant that’s true to ant colonies while also an allegory of war.

In Antworld, everyone has their role. But one tiny newborn ant is different. He has a name: Douglas. As Douglas grows, he watches others carry food in a long, beautiful line. He wants to join that line, but that is not his job. He is to be a soldier to protect Antworld from enemies. He is proud of his uniform and gets to march in a formation while a band plays and other ants wave flags. But when Antworld comes under attack, there is no more pomp and circumstance. Large shells whiz straight toward the anthill, dwarfing it. A smoky, gun-powdered “BANG” explodes across one spread. Ross then abruptly changes the narrative, with one double-page spread showing World War I soldiers advancing across a shattered, gray no man’s land, the yellow of mustard gas and a smear of red in one corner the only spots of color; directly beneath the red is a typescript sentence: “The end.” This is followed soberingly by a monument covered in nameless A’s, with “Douglas” included. The cover shows a smiling, cartoonish ant with rainbow lettering for the clever title. But the immediacy of the ending is the antithesis of all that charm. That is what war can do. Change life in an instant.

Layered and shocking; to be read with the knowledge that a conversation on war will surely follow.