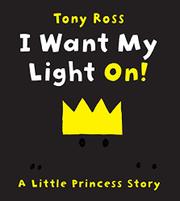 I WANT MY LIGHT ON!

From the Little Princess Stories series

This long-running British series (the first Little Princess book was published in 1986) has been adapted for television there. In this installment, her dad (in a jacket and tie, wearing his crown) has read her a story and is about to turn off the light when the Little Princess shouts, “I WANT MY LIGHT ON!”—with her entire face subsumed into one of those scarlet, tooth-edged mouths. She’s not afraid of the dark but of ghosts. Dad checks under the bed, and General, Admiral, Doctor and Maid assure her there are no ghosts. The Little Princess’s room is a bright yellow, but readers see glimpses of the castle’s arches and stone steps past her doorway—and then there is a little ghost behind her bedpost, with a skeleton toy the shape of Little Princess’s own stuffie. Ghost and Princess scare each other, and he dashes off to his mother, who, as she stirs her pot of frog, worm and spider stew, assures him that there are no such things as little girls.... The pictures are clear, bold and exaggerated to great humorous effect. (Picture book. 4-6)