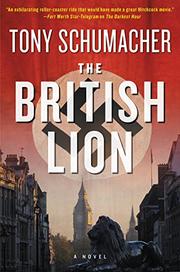 Isolationist Charles Lindbergh is president of the U.S. and sycophant Joe Kennedy is ambassador to the U.K., but spy Allen Dulles doesn’t believe "America needs Hitler." Dulles is running a clandestine operation to kidnap SS Maj. Ernst Koehler’s wife and daughter, and he wants Ruth Hartz, genius theoretical and applied physicist, in exchange. Hartz, a Jew, has special dispensation to work on a superweapon at a Cambridge laboratory. Koehler’s gotten Rossett out of more than one scrape, and so the German major knows the police inspector will help him. Rossett and Koehler drive the tale, with the proverbial flawed hero Rossett, burned out and sickened by Nazi anti-Semitism, struggling to be a better man. He sees helping Koehler reunite his family as an honorable choice. Within this foggy moral atmosphere—Rossett himself once participated in rounding up English Jews—Schumacher creates a believable yet depressing occupied England, frozen and snow-covered. Rossett fights his way to Cambridge to find Hartz. Koehler is stranded in London, floundering in a swamp of intrigue. Royalist restoration partisans are led by an aristocrat, Sterling, "a manipulator, a plotter, a survivor…but a friend to none," who reluctantly cooperates with ruthless Ma Price, "a proper villain, a nasty piece of work," a crime-family queen–turned–depraved resistance leader. Hartz, understanding the importance of her science, proves a character to cheer for, perhaps even as Rossett’s redeemer, before one betrayal too many.

Believable alternate history laced with multiple gunfights, turncoat duplicity, and an ending sure to propel the British Lion back into action.