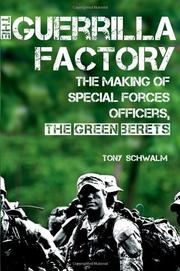 The Making of Special Forces Officers, the Green Berets

A retired U.S. Army Special Forces officer provides a behind-the-scenes look at the physical, psychological and emotional toll one pays to join the ranks of America’s most elite fighting force.

In his debut memoir, former Green Beret Schwalm minces no words recounting the near-tortuous training endured by America’s Special Forces. The author begins by categorizing Special Forces soldiers into two types, the Supermans and the Daniel Boones: While “Superman goes, does, and leaves” the Daniel Boone variety of soldier “goes, does, and stays and stays and stays.” The staying is the hard part, explains Schwalm, because it demands that trained killers learn to make nice with local citizens in foreign, dangerous terrain. It is a tightrope walk depending more on rhetoric and rapport than conventional weaponry, though for Special Forces soldiers like Schwalm, both brain and brawn have their place. The author’s riveting account into the inner workings of elite training proves particularly interesting to military outsiders, who soon learn of icy swims in makeshift rafts, endless midnight runs and war games so realistic that the word “games” seems wholly inaccurate. After enduring POW training—which demanded Schwalm and his comrades be locked in hot boxes and deprived of all basic necessities—the exhausted soldier leaves the extreme training exercise having drawn a single conclusion: “I would rather be a pile of bleached bones shining in the sun than taken alive.” Soon after, the student becomes the teacher; Schwalm was dispatched to Trinidad to train Trinidadian commandos in the ways of American warfare. Yet in the wilds of Trinidad, he was faced with a new and humbling challenge: learning to lead despite vast cultural differences.

An eye-opening, unconventional war story in which the war itself resides in the training.