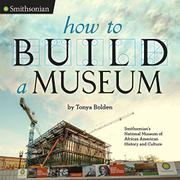 HOW TO BUILD A MUSEUM

An account of how the “hundred-year hope” for a National Museum of African American History and Culture came to fruition, with glimpses of the new institution’s treasures.

Bolden looks past most of the friction and politics to focus on the heroically sustained effort to make this museum a reality—a campaign that began during a huge reunion of Civil War veterans in 1915 and at last reached the groundbreaking stage at a site near the Washington Monument in 2012 (this volume is scheduled to coincide with the building’s planned opening in September 2016). Along with discussing the ins and outs of designing, creating, and staffing a new museum of this magnitude, the author describes how the curators went about soliciting and gathering a collection of national stature. That collection ranges from an entire segregated railway car from the 1920s and a shawl worn by Harriet Tubman to “documents, dolls, diaries, books, balls, bells, benches, medals, medallions, and more.” In a second section organized along historical and topical lines, big, clear photos of some of these rarities, with explanatory captions, offer insight not only into the diversity of the museum’s holdings, but also into its broader mission to “drive home the point that black history is everybody’s history.”

An inspiring tale as well as a tantalizing invitation to visit one of our country’s newest “must see” attractions.