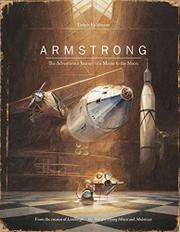 The Adventurous Journey of a Mouse to the Moon

A furry genius with eyes on the skies goes where no one has gone before.

Golden-toned, lavishly detailed views of a mid-1950s world from a city mouse’s eye level enrich a soaring tale of astronautic achievement. Inspired by a visit to that hidden wing of the Smithsonian where flying machines built by rodent aviators of the past are exhibited, a mouse resolves to bring back proof of his theory that the moon is made of stone (the other mice, understandably, find the notion that it’s made of cheese more compelling). Persevering through multiple false starts and setbacks, including a disastrous fire caused by an experimental roller-skate rocket, he constructs at last an oddly familiar-looking multistage craft that carries him into space and on to a lunar landing. Clad in a space suit with an ink-bottle helmet, he ventures out to gather a souvenir rock and plant a tiny flag, then returns in triumph to be acclaimed by his peers. The illustrations are visually immersive for their wealth of precisely rendered period items and architecture, also adding side business both humorous and dramatic to the epic venture. Positing that some of the mouse’s diminutive but exact design drawings later fell into human hands and inspired the Apollo program, Kuhlmann (Moletown, 2015) closes with a short history of our own early space travel featuring photorealistic portraits of that other Armstrong and like (supposed) pioneers.

“One Small Step for a Mouse” indeed.