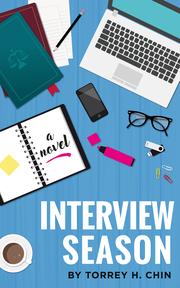 Chin’s debut novel tells of several seasons in the life of a frustrated aspiring lawyer on the hunt for a job in the big city.

Over the course of this book, Jaime Fells, with her freshly minted law degree, grows increasingly impatient as she makes her way through a sweltering Manhattan summer, then fall and winter. She’s temporarily staying in her best friend Marissa’s Upper East Side apartment and driving a BMW that has seen better days. Her adventures begin after a particularly deceptive Craigslist ad sends her to an interview with the condescending coordinator of a staffing placement agency (instead of the law firm advertised), then to a fruitless meeting for a compliance job that would require a New Jersey commute. At least she gets to meet handsome, Jewish, Argentinian law grad Jack Sidley in a waiting room. Her other roommates, Katie and Allison, provide some levity, lively repartee, and companionship while she travels the difficult road of casting “as wide a net as possible” in the employment arena. Sparks fly as Jaime and Jack begin dating, but drama isn’t far behind; she also flirts with Allison’s brother Kellan, who’s visiting the city for a few months, and there’s some simmering resentment between Jaime and Marissa. Later, Jack’s dishonesty drives a wedge between the couple. Still, things all turn out well in the end, of course, which will surely delight readers. There’s a palpable feeling of ambition and frustration running through Chin’s novel about survival, friendship, and romance in the wilds of New York City. Readers will find themselves drawn into Jaime’s story; she’s a tough protagonist who’s sometimes an open book and at other times a smoldering mystery. There are a few incidences of extraneous exposition, but engaged readers who want to know more about Jaime may get their wish for a sequel.