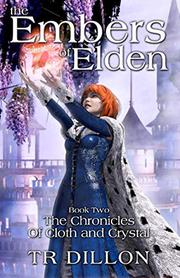 THE EMBERS OF ELDEN

From the The Chronicles of Cloth and Crystal series, volume 2

A young witch seeks to break a magical gem’s hold over her in this sequel.

Sixteen-year-old Elan Montescue of the Riege is a memory witch, able to read recollections through crystals and pieces of cloth. In this fantasy series’ first book, Elan left the safety of her Keep planning to avenge her family’s murder, and discovered an outside world full of warring factions. She also met Stille Vespers, her “Anaiah,” a boy her age who’s a kind of human crystal. After using a special “rubystone” to bring Stille back to life, she’s now in thrall to the gem. It wants her to meet with Catherine, the mother who abandoned Elan when she was 5, in the city of Darine. But Catherine is now allied to Our Master, a despot with powers of his own; he rules Karator, across the Impassable River, and plans to invade the Riege. Refugees from Karator live a precarious life in the Riege, where they are mistrusted and scapegoated, but they too hate the Master. Kontessa, a Karator girl with a silver hand—symbolizing resistance to the Master—makes her way to Darine, as does King Marcellus, who survived a coup attempt by a religious sect and now travels in disguise to learn more about his realm. As a great conflict brews, things look dire—but a girl’s voice from the rubystone tells Elan of a way to defeat the Master. Can the voice be trusted? In this rich novel, Dillon (The Memory Witch, 2018, etc.) deftly weaves all these disparate strands together, giving readers a more comprehensive view of the Riege, Karator, and the people of this world. Strong action sequences enliven the plot, which sometimes bogs down a bit in the teenagers’ melodramatic emotions. For example, when Elan tells Stille about his miraculous rescue, he immediately concludes: “You’ve turned me into a monster. . . . I should be dead.” In addition, cloth and crystal magic, so original and integral to the first volume, plays little role here, which is somewhat disappointing.

An often complex and exciting fantasy with a few flaws.