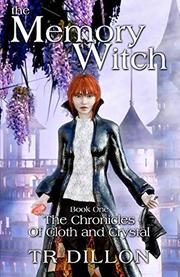 From the The Chronicles of Cloth and Crystal series, volume 1

A teenage girl who has magical powers that affect recollections sets out to avenge her family in this fantasy series opener.

When Elan Montescue was 6 years old, her family’s villa was burned and her father and brother murdered. Thanks to her loyal tutor, Gregor, Elan escaped, fleeing to an ancient Keep in the mountains. The girl vowed revenge, using her powers as a “memory witch.” By using crystals and pieces of cloth to focus her abilities, Elan can gather memories from people and also force them to remember what they’d prefer to forget. The day after her 16th birthday, she leaves the safety of the Keep to hunt down and kill the men who destroyed her family. She ventures out into Riege, where the political situation is precarious. The elderly king is growing weak, opening a power vacuum that the Order, a religious group, is ruthlessly maneuvering to fill while the Karators—red-skinned foreigners said to be savage—are restless. As she searches, Elan faces enormous danger on several sides. But she may be able to connect with the “Anaiah,” a boy her age who’s a perfect match; this human crystal grants a memory witch extraordinary power. And some in Riege stand against the Order. Can Elan gather these strengths to work her retribution? Though there are familiar elements to this coming-of-age quest tale, Dillon (Mr. Kunz, 2018, etc.) conjures up an original take with the cloth-and-crystal-magic theme. Crystals are the more traditional magical item; but as Elan uses the cloth, it becomes clearer how certain colors, weaves, and other particularities relate well to the differing textures of memory. The author also nicely integrates a romantic plot, when Elan meets her Anaiah—whose first touch causes literal sparks—with several mysteries, both political (What has the Order been up to? What do the Karators intend?) and personal (what has become of Elan’s mother, Catherine, who left her when she was very young, and why did she depart?). While Book One comes to a satisfactory conclusion, the groundwork is set for future volumes in the series.

A solid adventure with a determined heroine.