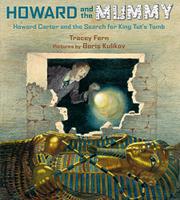 HOWARD AND THE MUMMY

Howard Carter and the Search for King Tut's Tomb

Fern and Kulikov, collaborators on the picture-book biographies Barnum’s Bones (2012) and W is for Webster (2015), bring the self-taught archaeologist who discovered King Tut’s tomb to life.

Howard Carter’s obsession with mummies began when he was a boy in England and visited a nearby mansion filled with ancient Egyptian artifacts. Carter dreamed of discovering a mummy himself. At 17, he took a job copying ancient art for the Egypt Exploration Fund. Awed by the art and architecture he sketched and copied, Carter was eager to make discoveries of his own. He taught himself the methodologies of archaeology, Arabic, geology, Egyptian history, and how to read hieroglyphics. As an antiquities inspector for the Egyptian government, Carter excavated several tombs only to find they had been looted. Undaunted, Carter devised a plan to excavate every unsearched inch in the Valley of the Kings. His dogged persistence paid off in 1922 when he discovered the treasure-filled tomb of Tutankhamun. Quoting from Carter’s own account, Fern infuses her story with excitement. She describes Carter as having a “funky personality” with a “stubborn attitude and worse table manners”; Kulikov’s exaggerated illustrations energetically capture Carter’s ambition and fascination with his subject.

An engaging and informative true story of perseverance and discovery.