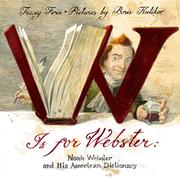 W IS FOR WEBSTER

Noah Webster and His American Dictionary

Noah Webster’s path to creating his iconic dictionary is brought to life in this picture book.

Noah Webster, Fern tells readers, was “an odd fellow” in both looks and interests. He was a tall, skinny child with “brilliant red hair” who used big words and wished his one-room school in Connecticut were in session longer and gave out homework. In 1774, his father, aware that Noah would make a terrible farmer, sent him to Yale College instead. During Noah’s time at Yale, the Revolutionary War began, and when it was over, Webster decided that what the fledgling nation of America needed was its own national language. He wrote a small “blue-backed speller” that simplified the spelling of some English words and included some strictly American words. Its success propelled Webster to begin work on a full-fledged American dictionary—a task he wouldn’t complete for nearly 20 years. Fern, whose narrative also imparts the idea that holding true to one’s passion can result in significant achievements, realistically portrays Webster’s discouragement as well as his determination—and his prickly personality. Kulikov’s illustrations, with their 18th-century feel and creative medley of scenes that encourage readers to look closely to “read” their meanings, cleverly interpret the text.

A fascinating look at the determination and vision that led one man to create an essential resource.