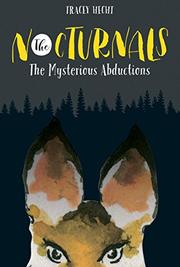 From the Nocturnals series, volume 1

Night after night, animals have been disappearing. A wombat, a honey badger, several kiwis, and even a tarantula have found themselves victims of this nocturnal predator. Or is it predators? Luckily Tobin the gentle pangolin, Bismark the multilingual sugar glider, and Dawn the brave fox are determined to get to the bottom of it. Calling themselves the Brigade, they steadily pick up clues as well as other animal comrades. But when Bismark disappears, only their wits and unique talents will save him and the other missing wildlife. Hecht's characters diverge from the standard talking-animal fare. Readers interested in other, less-well-known members of the animal kingdom will appreciate the variety of critters in the book. The different animals’ particular characteristics enhance their personalities without pigeonholing their behavior, giving the author an opportunity to celebrate their strengths—happily without saturating the plot with a too obvious feel-good message. Bismark's distractingly italicized international vocabulary feels forced at times but is buoyed by the comedy of his misguided chivalry. The genuine concern of the animals for one another, even the villain, underscores the value of compassion and camaraderie. Full-color chapter heads are but one feature of the pleasing design.

A delightful adventure about the power of uncommon traits and the joys of newfound friendship.