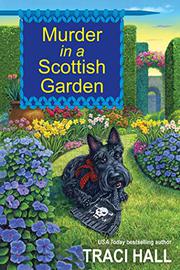 MURDER IN A SCOTTISH GARDEN

A class trip involves a budding sleuth in murder.

Paislee Shaw lives in Nairn, a peaceful Scottish town, with her son, Brody, her Scottish terrier, Wallace, and the grandfather she’s recently been reunited with. She’s agreed to chaperone Brody’s class trip to the gardens of the Leery Estate, where she hopes to get a message to Shawn Marcus, the son of Lady Leery and the landlord of her knitting shop and several nearby shops that all face eviction notices. When Shawn’s look-alike cousin, Charles, is shot to death just across a hedge from Paislee, she plunges into a nightmare investigation of the dysfunctional Leery family. Paislee has already crossed swords with DI Zeffer, but his disapproval does not deter her when her livelihood is at stake. Lady Leery is infamous for her much younger lovers, several of whom were on the scene along with Aila Webster, the 30-year-old illegitimate daughter she recently brought into the family business. A little snooping reveals that Shawn, whose kidney transplant from Aila did not last, is desperate for another organ. Charles, the perfect match, wanted a lot of money for his kidney, but Shawn seems an unlikely suspect in his murder, since he wanted Charles alive. When Paislee’s bestie, Lydia, invites her as her plus-one at a fancy company dinner to be held at Leery Estate, she sees a perfect opportunity to learn more about the family dynamics, save her store, and solve a murder.

Inquisitive and down-to-earth, Paislee makes a charming sleuth in this suspect-packed mystery.