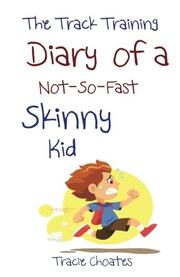 THE TRACK TRAINING DIARY OF A NOT-SO-FAST SKINNY KID

In Choates’ (Playing the Game as a Man!, 2007) first YA novel, a young man barely survives middle school challenges on and off the track while learning life lessons.

Jack Vandergriff is determined to make a name for himself in this year’s yearbook, and he decides that joining the track team is just the ticket. He masks his insecurities with bravado, but he learns on the very first day of track tryouts that he’s totally inept; amazingly, however, he makes the team. During track season, it always seems like he’s taking one stride forward for every two strides back, but he persists. He’s also dogged by his annoying little sister, Abby, who always carries a camera, and his (supposedly) best friend, Broc, who’s a photographer for the yearbook; they both catch him in embarrassing photos, and Broc gleefully shows his pictures to the whole school. As Jack becomes a laughingstock, his longtime friend, Grace, is his only comfort, aside from his supportive but largely clueless parents. But he slowly climbs out of this hole to challenge Broc. Along the way, he learns that his “biggest and toughest opponent wasn’t the other runners. It was me.” Choates offers a believable protagonist in Jack as a kind of middle school Everykid: somewhat nerdy, painfully insecure, needing to belong where it counts, and not above desperate lying. Readers may find it a stretch, though, that Jack’s lifelong best friend could turn on him for relatively flimsy reasons, merely for the purposes of plot complication. However, Choates, a former high school runner herself who now competes in marathons, does make the races convincing, ably portraying the outer pain and inner torment they cause. In the end, she shows that Jack will enter eighth grade humbler and wiser.

A promising YA debut, despite a few weak spots in characterization.