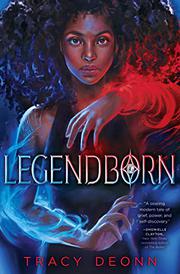 From the Legendborn series, volume 1

After her mother dies in an accident, Bree begins a residential program for enterprising teens at her mother’s alma mater and, soon after her arrival, witnesses a magical attack that triggers hidden memories about the evening her mother was killed. Haunted by the fact that their final conversation was an argument, Bree begins a redemptive quest to uncover the connection between her mother’s death and the university’s secret society, the Order of the Round Table, joining their ranks as an initiate and unwittingly stumbling into a centuries-old supernatural war. While competing in the tournament that determines entry to the society, Bree discovers the truth about her heretofore unknown magical abilities, unwinding a complex history that showcases the horrors chattel slavery in the American South perpetuates on the descendants of all involved. Push through clunky expositions and choppy transitions that interrupt the cohesion of the text to discover solid character development that brings forward contemporary, thoughtful engagement with the representation, or lack thereof, of race in canonical Arthurian lore and mythologies. Representation of actualized, strong queer characters is organic, not forced, and so are textual conversations around emotional wellness and intergenerational trauma. Well-crafted allusions to established legends and other literary works are delightful easter eggs.

Don’t look over sea or under stone, this is the fantasy novel for all once and future fans of suspense-filled storytelling.