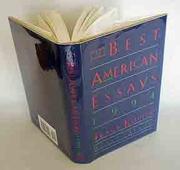 Volume nine strains a bit to achieve its predecessors' diversity by stretching the definition of ``essay.'' Take, for example, the two longest contributions. In ``Trucking Through the AIDS Belt'' Ted Conover spends time on the road with Central African truckers (``true museums of disease,'' a doctor calls them), while in ``The Last Shot'' Darcy Frey hangs out with black high school basketball players, examining the ``cherished parable'' that college scholarships provide a way out of the ghetto. (Frey has expanded this piece into a book. See p. 1185.) Frey's piece is excellent; Conover's, though more diffuse, is still pretty good. Yet it's questionable whether these in-depth reporting pieces can really be considered ``narrative essays'' (Kidder's term). Other entries collected by series editor Atwan and Pulitzer Prize-winning guest editor Kidder (Old Friends, 1993, etc.) hew more closely to the form. There is cultural commentary: Adam Gopnik on the ``High Morbid Manner'' in contemporary art, Cynthia Ozick finding echoes of Henry James in Salman Rushdie's appearance at a Paris seminar, David Denby celebrating a Dead White Male (Homer) on his return to Columbia nearly 30 years after graduation. There are reflections on our relationship to our habitat (William Langewiesche's marvelously lucid account of aviation's coming of age) and the animals we share it with (Vicki Hearne, in the collection's most delightfully offbeat entry, finding ``deep knowledge about animals...in a trained-orangutan act on a Las Vegas stage''). Disappointingly, the collection has only one essay on our political and social relations: James McPherson's vapid consideration of Martin Luther King's ideas about community. Lastly, there are lively autobiographical sketches. Treating a sadistic male patient, Lauren Slater finds surprising links to her anorexic past, while Lucy Grealy, assessing years of reconstructive surgery, ponders the link between the face and the self. Outshining them all is the series' ever-bright star, Stanley Elkin. In incandescent prose, he writes about the worst days of his life (``the season of my madness''); the result is both harrowing and wildly funny. A solid addition to an annual series that has won many plaudits.