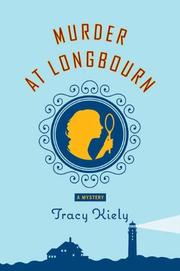 MURDER ON THE BRIDE'S SIDE

A Jane Austen fan who’s spent too much time with Sense and Sensibility tries to solve a murder at her best friend’s wedding.

The friendship between no-nonsense Elizabeth Parker (Murder at Longbourn, 2009) and flighty Bridget Matthews dates back to their childhood. So it’s no surprise when Bridget chooses Elizabeth as her one and only attendant at her wedding to Colin Delaney at Barton Landing, the Matthews family’s Virginia mansion. Nor is it odd that Elizabeth and her beau Peter McGowan are invited by family matriarch Elsie to stay at Barton Landing—along with Bridget’s parents Graham and Blythe, her aunt Claire and Claire’s obnoxious husband David, and her wheelchair-bound uncle Avery and his gold-digging wife Roni—while other out-of-town guests are housed at the Jefferson Hotel. As at any wedding, tensions run high, especially after svelte wedding planner Chloe Jenkins confides in Elizabeth that she and Peter were once engaged. The stress escalates as Roni announces that she’s just about persuaded Avery to sell the family business for oodles of cash. But it’s her cruelty to her daughter Megan that pushes her stepson Harry over the edge, leading to a shouting match. Next morning, Elizabeth finds Roni stabbed to death. The Jefferson Hotel key card lying next to the body gives Elsie hope that the killer lies outside the family circle, but Detective Grant of the local police knows that too many Matthewses have too many motives for murder.